WordStats is special feature of the Archive that looks at all the words that make up the clues, and their length and frequency. By breaking down clues into their component words it’s possible to see and compare them in a new way. Azed is of course the sole arbiter of quality in the clue-writing competition, but WordStats is a great source when it comes to quantity.

How to find WordStats in the Archive

WordStats are collected for all clues in the Azed archive from 1972 onwards. 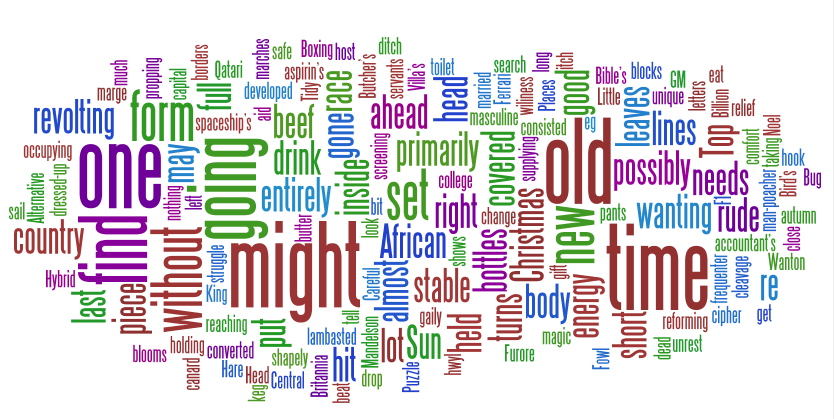 WordStats shows us that there is a remarkable consistency of clue lengths, even though clues vary in length from 4 to 230 letters. In each of the past 49 competition years, the average ‘normal’ clue has contained between 9 and 10 words and between 40 and 48 letters. The average clue length over the whole archive (more than 15,500 clues of all types) is 9.7 words and 46 letters. There has been no trend to longer or shorter clues over the life of the Azed series.

Clue length is most highly correlated with clue type, for the obvious reason that clues such as ‘Right and Left’ and DLM demand longer clues.

In normal clues there’s a strong relationship between the number of letters in the word clued and the number of letters in the clue. In clues for words from 4 to 12 letters the average clue length increases by about one letter for each extra letter in the word clued. 4-letter words have an average clue length of 41 letters, rising to an average of 47 letters for 12-letter words (competitions 1 to 2603).

Azed competitors can be extremely brief when the opportunity arises. Here are the normal clues – 3 of them Cup-winners – that are shorter than the words they clue:

and some others that weigh in at no more than ten letters:

Competitors’ brevity is at least equalled by their prolixity. The longest ‘clue’ in the archive is this 230 letter Jingle for the Three Kings by C. H. Hudson from competition 143

You were three chiefs of Middle-East,
You the three Kings of Orient were –
The modern Sheik’s not in the least
Concerned with frankincense and myrrh.
You journeyed through the winter’s cold
To mark with gifts the angels’ news –
Your counterpart, agog for gold,
Just grabs his oily revenues

Be a better preacher, a sensible one – move quickly to conclusion, then shut up – or sermons will seem a show-off of theology and congregations lose interest, glad to substitute hymns and organ for teaching.

The longest cryptic clue is a ‘Right and Left’ of 30 words and 149 letters by P. F. Henderson for URTICARIA / APOGRAPHS in competition 447

Rash primaries in USA – really, those idiots Carter and Reagan (ignoring Anderson) – you can’t choose between them! Perhaps hostages will be released – then you could say: ‘He’s set these free’

One leader of morris men experiencing volte-face over performing in grotesque pageant – I’m opposed to knotted handkerchiefs, I shan’t ring any bells!

You might expect cup-winning normal clues to be somewhat briefer, and they are (9 words and 42 letters on average), though in competition 2486 R. J. Heald (again) got through 82 letters and 14 words clueing the 7 letters of BRUHAHA

Global warming and oceanic pollution are what? Many scientists’ se/minal planetary afflictions

There are 150,833 words altogether in the clues of the Archive, and 22,619 distinct words. Just as in everyday language, a few words occur very frequently, a large number very rarely, and the rest somewhere in between. But this distribution makes the clues much more diverse than everyday language or literature, as this rather selective table shows:

The most popular words in the Archive clues are unsurprisingly also some of the most frequently occurring words in English (competitions 1 to 2603).

Behind them we find some cryptic staples

and a little further on, some thematic favourites

and, of course, references to the art of clue-writing

Over half of the distinct words in clues (11,871 out of 22,619) occur only once in the entire Archive. Every competition and most competitors have contributed some unique words. Each competitor is credited with their unique contributions in the competitor WordStats pages.

Before the heart ensnares one, one likes to go on a binge

contains the Archive’s only instance of ‘ensnares’ and Competition 1’s clues include ‘Doughboy’, ‘unhealthy’, ‘groats’, ‘lunch-time’, ‘Borgia’, ‘fascinate’, ‘mysteries’, ‘strychnine’s’, ‘corgi’, ‘tigs’, ‘Tollesbury’, ‘promiscuously’ and ‘Bacchae’, none of which has been repeated in the ensuing 49 years of competitions.

And which clue has contributed the most unique words? The answer lies in that unique ‘Jingle’ competition 143, and the following verse from W. Jackson:

What’s in a word?

In these WordStats a ‘letter’ is any character from A to Z (including accented letters) or digit from 0 to 9.

A ‘word’ is any contiguous sequence of letters, digits, hyphens or apostrophes terminated by any other characters (spaces, punctuation) or either end of the clue. Every form of a word, including differently hyphenated or apostrophised forms is considered distinct (e.g. ITS and IT’S are each counted as distinct single words).